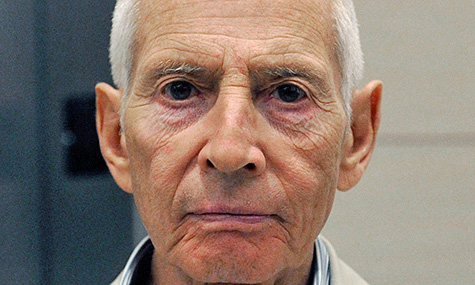 Durst, 71, is being held in Louisiana because authorities say they found a gun and drugs in his hotel room after he was arrested.

Durst is a felon with four previous convictions, which elevates the charges against him. According to the Orleans Parish District Attorney, if he is found guilty on these two charges, he could go to prison for the rest of his life.

The millionaire was moved from a New Orleans jail to a state prison with a mental health unit because he is considered a suicide risk, officials said Wednesday. He is being monitored 24 hours a day in a private cell.

Durst is awaiting a transfer to Los Angeles to face murder charges in the death of his friend Susan Berman 15 years ago.

A city magistrate had ordered that Durst remain in the New Orleans jail. But the Orleans Parish Sheriff’s Office appealed that order, and Louisiana’s 4th Circuit Court of Appeal ruled in favor of the sheriff on Tuesday.

He moved that night to Elayn Hunt Correctional Center in St. Gabriel, about 70 miles from New Orleans, according to the sheriff’s office.

A three-judge panel ruled that the sheriff has sole authority to decide where to house inmates needing mental health treatment.

But Durst’s attorney said he would be surprised if any evidence against his client were found.

Dick DeGuerin called the search “a publicity stunt” by a California prosecutor looking to pin the killing of Durst’s friend 15 years ago on his client.

“I don’t know what they could be looking for 15 years after Susan Berman was killed 1,500 miles away,” DeGuerin said. “I would really be surprised if they found anything of any evidentiary value. They can search now till kingdom come. They’re not going to find anything because there isn’t anything.”

But Durst himself may have pointed to his Houston condo, in a recording made while talking to himself in a bathroom immediately after a tense interview with the makers of a documentary about his life.

Just before saying he “killed them all,” he says “I don’t know what’s in the house!”

In this bathroom tape – which forms the shocking conclusion of the six-part HBO documentary that wrapped up Sunday – Durst talks to himself in short bursts of whispers, apparently contemplating his arrest. The filmmakers say they shared the tape with police months ago.

Durst also has been suspected – but never charged – in the disappearance of his first wife in New York. In 2003, he was acquitted of murder in a dismemberment death in Texas.

LAPD spokesman Sgt. Barry Montgomery said the department is not commenting until Durst is in custody in Los Angeles. It’s not clear how soon he will be returned to California.

Durst could face the death penalty if convicted of killing Berman, the daughter of a prominent Las Vegas mobster, under special circumstances that allege he ambushed her and murdered a witness to a crime.

A law enforcement official said his arrest on the murder charge was based on words he wrote in a letter to Berman a year before her killing, which match one that pointed police to her body.

That’s the key new evidence that revived the cold case, the official told The Associated Press on the condition of anonymity because the investigation was ongoing.

DeGuerin disagreed: “This is a case that the L.A. D.A. has issued a warrant based on a television program, a (expletive) docudrama.”

Bob Martin, a neighbor of Durst’s in Houston, described the murder suspect as courteous, and no quirkier than anyone else in the building.

Durst waived extradition to California on Monday, but was then charged with being a felon in possession of a gun and illegally carrying a weapon with marijuana, a controlled dangerous substance. Assistant District Attorney Mark Burton said investigators found more than a quarter-pound of pot and a revolver in his hotel room.

DeGuerin said he wants a quick hearing in Louisiana, so that “Durst can go to California and face trial as quickly as possible.”

The judge in New Orleans scheduled another hearing for Monday