The infant ape’s life was brief, dying before the age of two. Yet its discovery 13 million years later by a team led by Bay Area anthropologist Isaiah Nengo is casting light on a shadowy and pivotal period in pre-human history.

Characteristics of the fossil, the most complete extinct ape skull ever found, mark it as a new species in the great flowering of ape evolution, which later led to the emergence of humans.  We didn’t descend from the little ape; rather, we have kin in common.

said Nengo, who lives in Ross, digs in Kenya, and teaches at Cupertino’s DeAnza College. His research, published in Wednesday’s issue of the prestigious journal Nature, was funded by the San Francisco-based Leakey Foundation, founded to explore the origins of humanity. 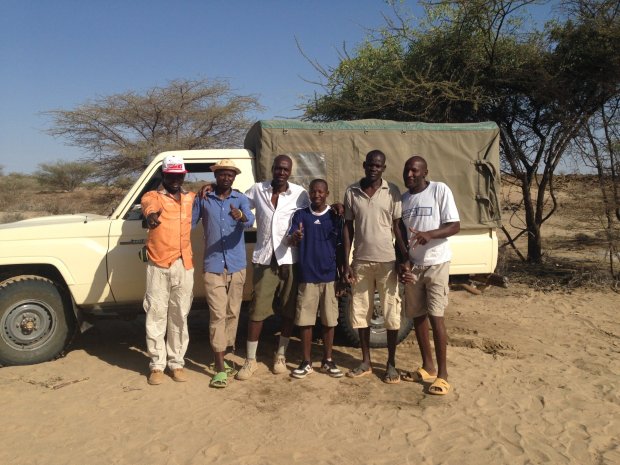 Little is known about ancient apes, the ancestors of living apes and humans.

It was a time of great evolutionary success, with an explosion of genetic diversity. And then the apes mysteriously declined. Only a few remained, in restricted places: gibbons and orangutans in Asia and chimps, gorillas, and the early human australopithecines in Africa.

In contrast, monkeys prevailed. And humans, for better or worse, are extraordinarily successful.

The 13 million-year-old fossil, now extinct, reveals what the common ancestor of all living apes and humans may have looked like.  Dating back to the Miocene, its species has been named Nyanzapithecus alesi.

We branched off quite recently, only 6 to 7 million years ago.

The stunning discovery in 2014 came at the end of a long and disappointing day near the western shore of Kenya’s Lake Turkana in Africa’s Great Rift Valley, in a place full of volcanic rock and largely devoid of fossils, said Nengo.

Nengo was deeply invested in the success of the project at the Turkana Basin Institute. He had secured grant funding, assembled the team, coordinated the effort, and was responsible for everything from fuel in trucks to water in jugs.

“We spent the whole day finding nothing. Zero. We were in a pretty bad mood,” he recalled. So the team gave up and went back to camp for dinner, walking the same familiar route they had always taken, back and forth, every day.

An assistant, John Ekusi, pulled out a cigarette. “We told him: ‘You’re going to kill us! Smoke it far away,’ ” Nengo said.  So Ekusi walked ahead of the team, about 500 yards.

Welcome to WireTelegram. An online platform that aims to provide high-quality, reliable, and informative content for readers interested in the fields of health, real estate, gaming, business, and tech – WireTelegram.com Our team of experienced writers and editors works diligently to bring you the latest news and insights from these diverse industries. Whether you’re looking for tips on improving your physical and mental health, advice on buying or selling property, updates on the latest gaming trends, or insights on the latest business and tech developments, WireTelegram has you covered.
Previous Post
Next Post